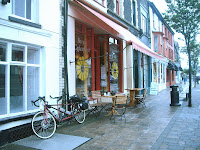 Have you ever uttered a throw away comment on the way to the bmx track only to have it come back and bite you on the bum?

This is the wholefood cafe in the middle of Machynlleth. It happens to be a great place to stop off on a long tandem journey, it does very good coffee and cakes.

This was actually the return leg of last weekends little adventure – which was decidedly warmer and a little damper than our outward journey. We left Sunny Manchester after work on Friday and rode thru the night and into the dawn. It seemed like a great idea at the time though at 3am on Saturday morning it was very cold and the Welsh valleys were more than a little misty – we had our doubts. After 170 miles and 18 hours into a headwind we arrived in Penparc near Cardigan in South West Wales, had a well earned bath and collapsed into bed. That evening we fell into the only curry house in Cardigan and stuffed ourselves silly.

After a little family time on the Sunday we got an early night in full expectation of a long day ahead. It was an early start, at around 5am we were gulping cups of tea and heading out into the dawn. This time of year it always surprises me how late the dawn is and how early the sunset arrives – it’s all downhill till next Spring. Anyway, it was nice to get the bigger hills out of the way early on and we made much better time heading North. The wind was behind us and we were fresh from a good nights sleep – unlike Friday when we’d both been working all day after getting up early to watch the Olympic bmx. Ooops.

The relatively flat Cheshire plains were a welcome relief as we covered the last 50 miles or so back via Chester and into South Manchester. After 13 hours pedaling we hit the Saajan take away for a couple of well earned veggie kebabs, yummy. Not a bad weekend for a pair of tandem newbies (well, one of us had pedaled around the park before!).

So, next time you have a silly idea what about following it through? It might be hard work but it’ll probably be damn good fun!