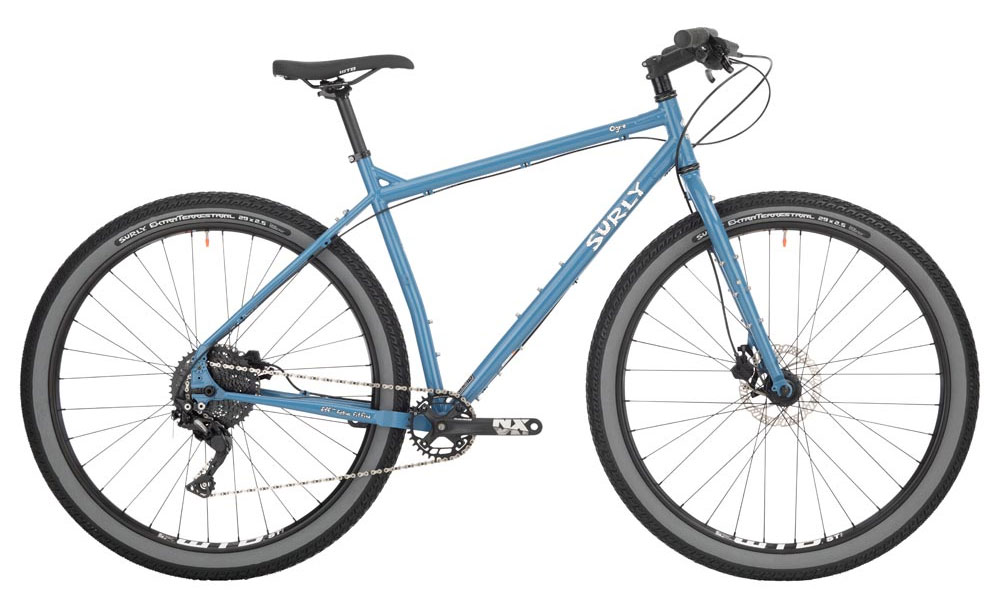 New Cold Slate Blue available as a frameset from early April (to build up however you fancy), and as a complete x1 build in June.

If you’re like us, your bike needs will likely change by the day, week, month or year. The Surly Ogre will get you to your job during the week, then way out of town on the weekend. It even has the chops to handle a cross-country trek or nine. It’s not sluggish on pavement or gravel and can also hold its own on singletrack. Ogre is designed to be the ultimate steel utility vehicle. It relishes in those “take-the-long-way-home-and-find-some-beverages-along-the-way” sort of commutes. You can also haul enough crap on it that you don’t even have to go home if you don’t want to.

For this year, Surly have simplified Ogre a bit. They’ve removed the canti studs, so it is now a disc brake-only beast. (To quench your unquenchable thirst for rim brakes, check out the Surly Troll.)

As far as other updates to the frame go, that about sums it up. Ogre still has everything else you’ve come to know and love: two water bottle mounts, four sets of three-pack bosses, mid- and low-blade fork eyelets, threaded holes for racks, fenders, and trailer mounting nuts, and a Rohloff OEM2 axle plate slot. It still features horizontal-slotted dropouts with Gnot-Boost spacing, a tweaked non-suspension corrected geometry, and a beefy tire clearance. It’s still fully compatible with both 29 x 2.5” and 27.5+ tyres. In the complete bike version, we’ve opted to go with a 1x drivetrain and a flat handlebar.

We typically try to avoid cliché terms like “Do-It-All” or “Swiss Army Knife of Bikes”, so we’ll just say that Ogre can probably handle most of the ideas that are bouncing around in your head.

Perfect for those long days of riding over varied terrain.

Available in sizes Small to XL.

Watch out! Is one of these custom Ogre builds under a bridge near you?

Opening times:
Tuesday, Wednesday and Friday
8am to 6pm
Thursday
10am to 7pm
Saturday
10am to 4pm
Sunday, Monday & Bank Holiday Weekends
Closed