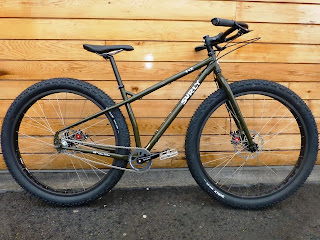 Thought it was time to get the Surly ECR dirty and this past weekend was perfect. We put our names down for the Bear Bones 200 a bit ago and have been popping to mid-Wales to recce some of the route for a while now. The area around the Elan valley is laced with mile upon mile of deserted bridleways and firetracks.

Deserted that is until 60 participants descended on a field in the small village of Pennant near Newtown on Saturday morning. After a bit of faffing and admiring, poking and discussing each others bikes we were off. The fast boys hit the road like it was a sprint race, we were naturally a bit more relaxed. Most of our research of the route has been in foul weather or darkness so it felt pretty good to be cruising singletrack in daylight and in fine, warm weather.

Soon enough the cruising was over and we were pushing and grappling our bikes over semi-pathless moorland. We’d previously floundered on the totally pathless areas and chose to stick to the trail this time and look on as others took the wrong turns. Screaming down a fireroad to a cafe stop for coffee and fruit cake was perfect. Strictly 20 minutes later we were off again on the valley road to the Devil’s Staircase. Shona had some fire in her belly as Stuart the organiser spurred her on with the news that she’d be only the fourth female to finish the event and if she got a wriggle on the first under 24 hours.

Soon it got dark as it does all too early this time of year and we were faced with the next 12 hours in a small pool of light. Sometimes in a pool of water but mostly it was light. We used SP dynamo hubs, Exposure Revo lights and Joysticks on our helmets for those slow moving moments. There were a few of those. On this terrain it doesn’t matter whether you’ve got gears or not, you’ll be off and pushing some of the time.

We passed the inviting turning for the bothy and sploshed our way through the river masquerading as a trail up towards Strata Florida. Some participants were in the pub as we went by and they looked oh-so-cosy.
We opted to push on up the hill towards Teifi Pools before the road turned to gravel and we were heading back towards the Elan valley again. Some of the faster ones had been here in the daylight but we were stumbling (almost) into big horny cattle laying in the trail in pitch darkness. Not a lot of light pollution in this part of Wales. Soon after this I was feeling the effects of being up and riding for 18 hours and needed a cat nap and some hot food. We found a little out of the way spot off the trail and rolled out the bivvy bags. An hour or so later we were back on our feet and tripping over a succession of less well concealed sleeping souls littering the trailside. We continued pushing up the hill towards an old Roman Fort before dropping down in the drizzle to a road section that took us North towards yet more mist and a little rain. 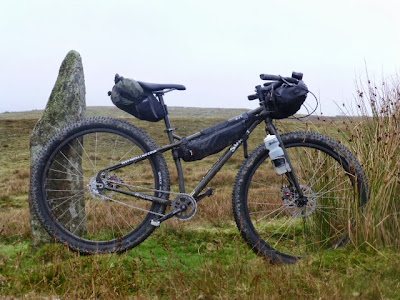 Once we were heading that way we were looking forward to the sunrise. It always lifts the spirits once the sun comes up. A few more snacks and a push up what seemed like a vertical hill at the time and we really were on the home straight. A bit of last minute confusion with uncooperative gates and we were soon screaming down a loose gravel descent through the woods to the finish and a very welcome cooked breakfast – all part of the deal.

We built up the ECR just in time for this event. I have to admit to a little concern as it came in at just around 30lbs. I worried unduly. The extra roll of those big tyres, comfort and bucket loads of traction more than made up for a couple of extra pounds. The difference those longer chainstays and lower bottom bracket made over the Krampus was really noticable when hooning downhill on loose bouldery surfaces. Stability helps overcome tiredness. We had also built a dynamo into the front wheel and that helped, no worries about running out of light power. Revelate and Wildcat luggage completed the bike and carried all we needed, more in fact. Turned out we’d taken too much food (or not eaten enough of what we carried) Next time we’ll probably re-arrange so that snacks are easier to get at – maybe something on the bars will be easier than rummaging awkwardly in jersey pockets that are covered by a shell while trying not to crash. 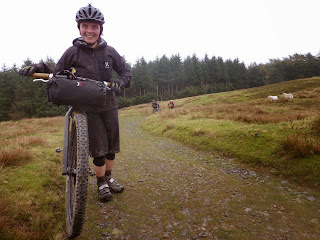 Shona rode her single speed limited edition Salsa El Mariachi for the event. We fitted it with a new Whisky Parts Co No 9 thru axle 29er fork to hold a brand new SP QR15 dyno to power the front light, Exposure Revo again. That’s a new fork to the UK – just 680g and wide enough to for a 3 inch tyre on a 50mm rim. Surly Rabbit Hole’s or the upcoming Velocity Dually? 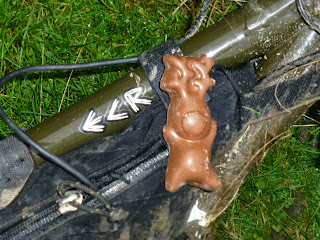 We finished off our breakfast by Eating Chocolate Reindeer of course. While basking in the glory of out little black badges… 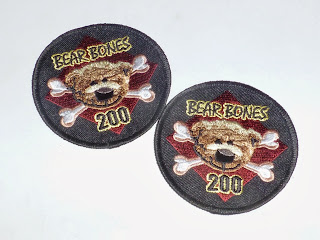 Finally a big thank you to one of the UK’s finest distribution companies. Ison Distribution really did pull out some stops to provide us with some UK firsts including the Surly ECR, Whisky forks and the QR15 SP dyno. These helped to make our ride fun and we owe them beer! 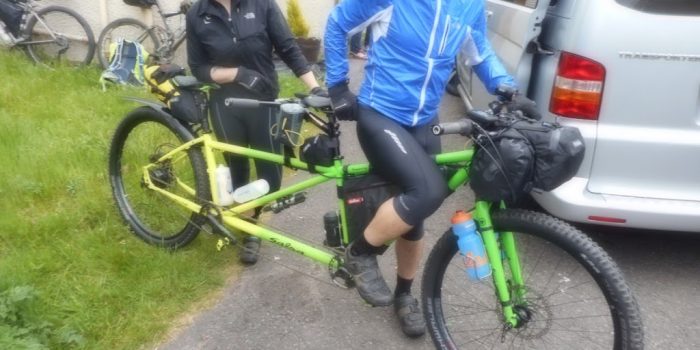 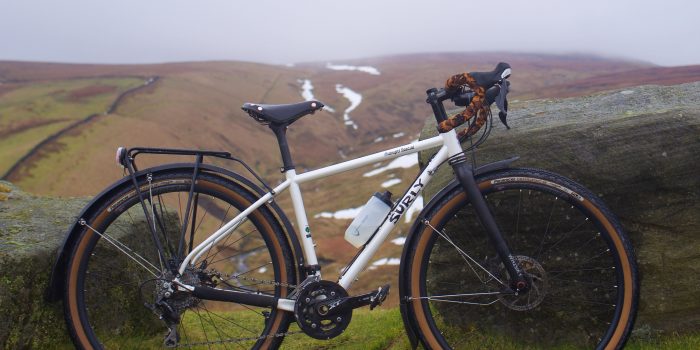 Love at first ride, my Surly Midnight Special. As soon as The Official Intergalactic Surly...