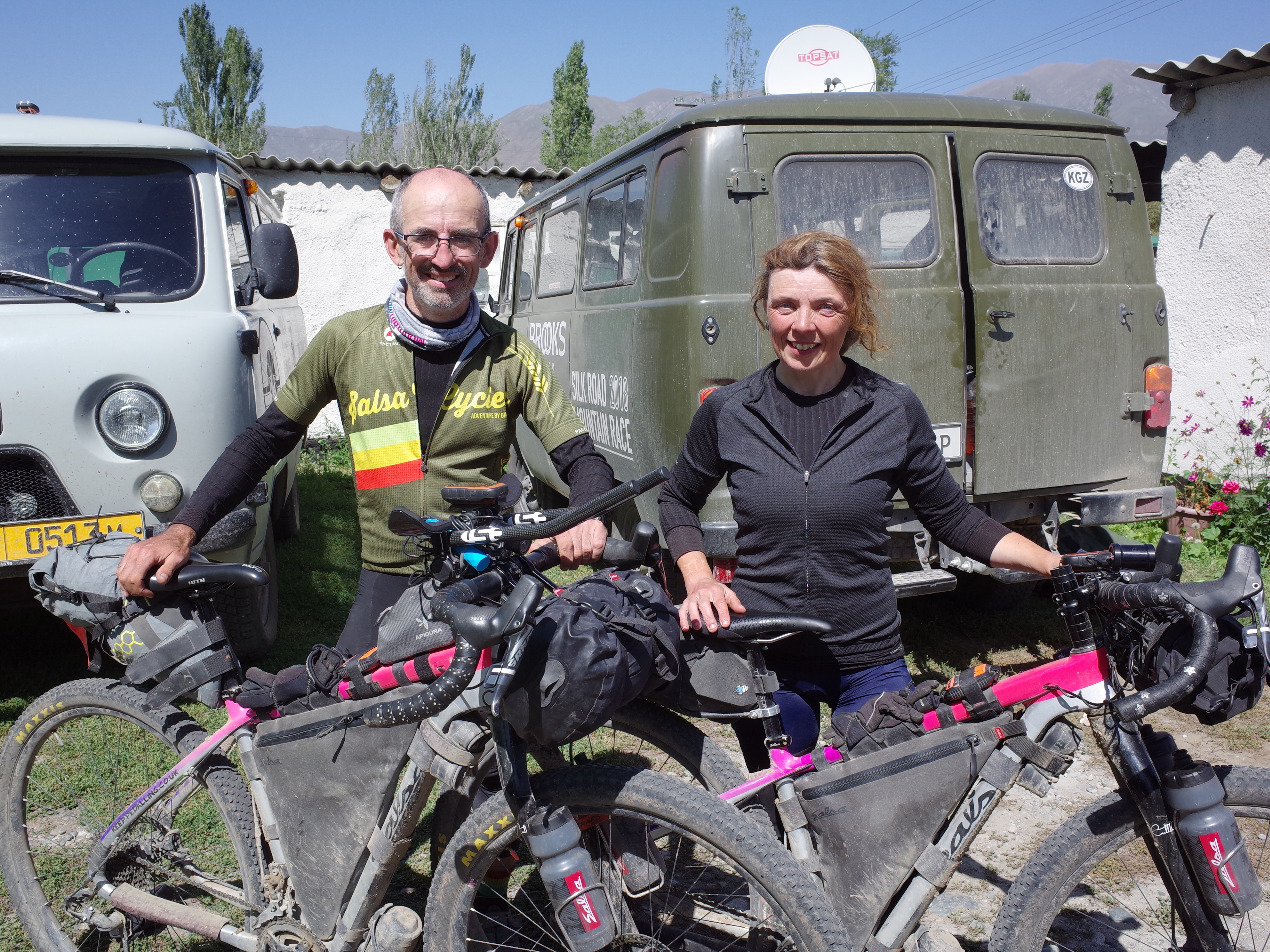 It took us 14 days to cover the 1700 kilometres to complete the first Silk Road Mountain Race. Four days longer than we had originally anticipated. That seems the going rate for the under-estimation for all 97 riders that toe’d the line in Bishkek on that Saturday morning. Of those starters less than 30 completed, that’s an astonishing dropout rate. Broken bikes and bodies, poor hygiene and high altitude taking it’s toll – many times the route was between 3000 and 4000 metres. Some riders just didn’t have time to complete with flights home booked on a tight schedule.

Flying in on the day before the race we crossed everything that our bikes would arrive and they did! We were not so lucky on the return trip as a delayed flight out of Bishkek scuppered the chances of our luggage making it to our London flight. 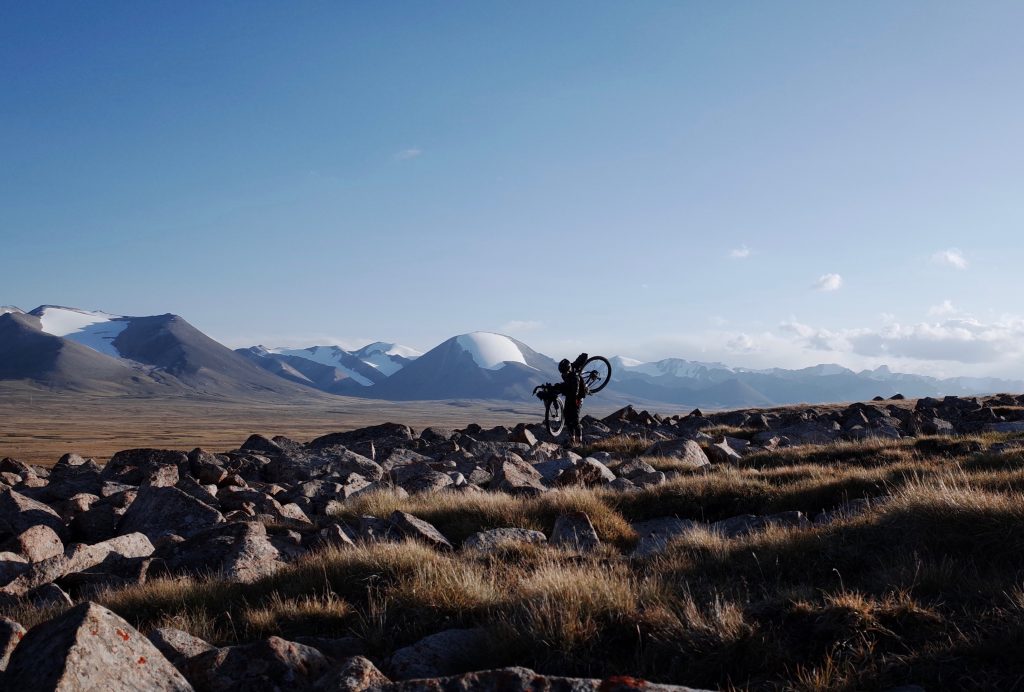 With little time to acclimatise the drug Diamox turned out to be a sensible precaution for us, we had little effect from altitude and often camped at around 3500m. Kyrgyzstan is a country of extremes, some days we were sweltering in 46 degree heat while at night camping high meant temperatures down below minus 8. This time of year we had darkness from 8.30 to 5am which usually meant finding a campspot in the dark and getting going in the dark too – so very cold coming down from high up! 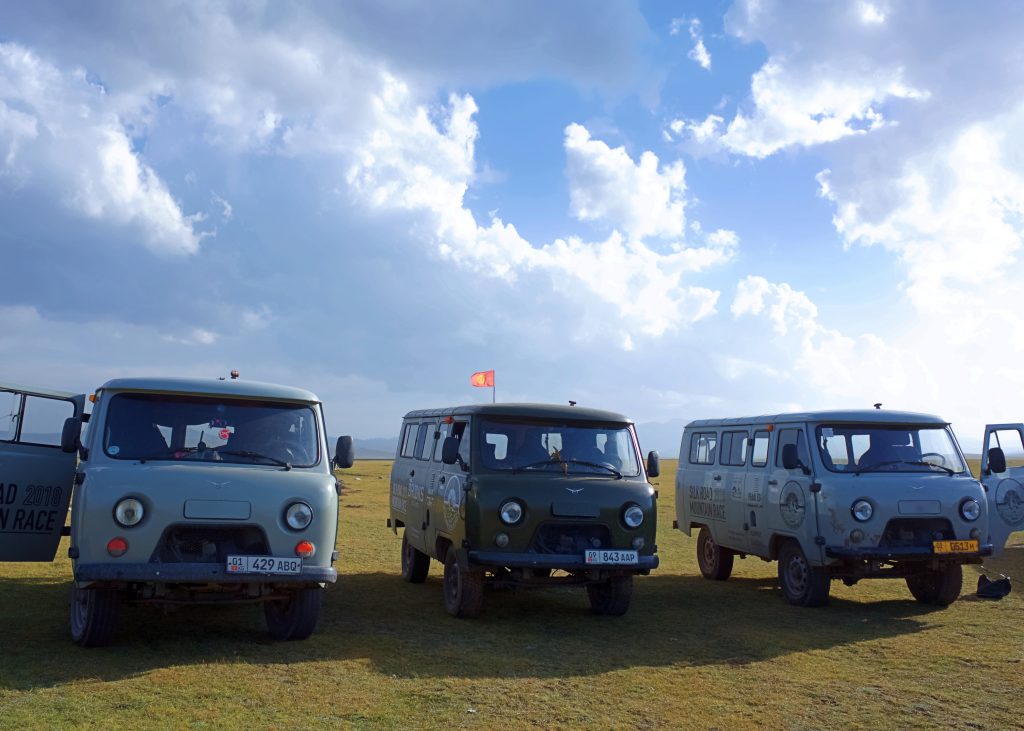 We have developed an attitude of ‘grab it while it’s there’ over the years and this is especially true here. Water is abundant except when it’s not. It’s often glacial too so beware when filtering, choose your source wisely. It can take a bit of hunting around for shops and they are often poorly stocked – we took some ready meals and ate a lot of noodles! The word vegetarian just doesn’t exist… The organisers recommendation to take bikes with at least a 2″ tyre was spot on, though some coped with less volume the washboard roads that went on for miles took their toll. We’d consider a suspension seat post of some description to take some sting out of those craters that sneak up on you. Elbows bend, bums don’t. Saddle sores were obviously abundant and just looking after yourself at the end of a long day takes time out of the schedule but should’t be underestimated. While there are some long stretches of tarmac along the Chinese border and near the big dam construction they were a small percentage of the route. For us there was a deal of pushing over steep passes especially towards the end and from the very start washboard surfaces on old unmaintained military roads pummelled us unrelentingly. 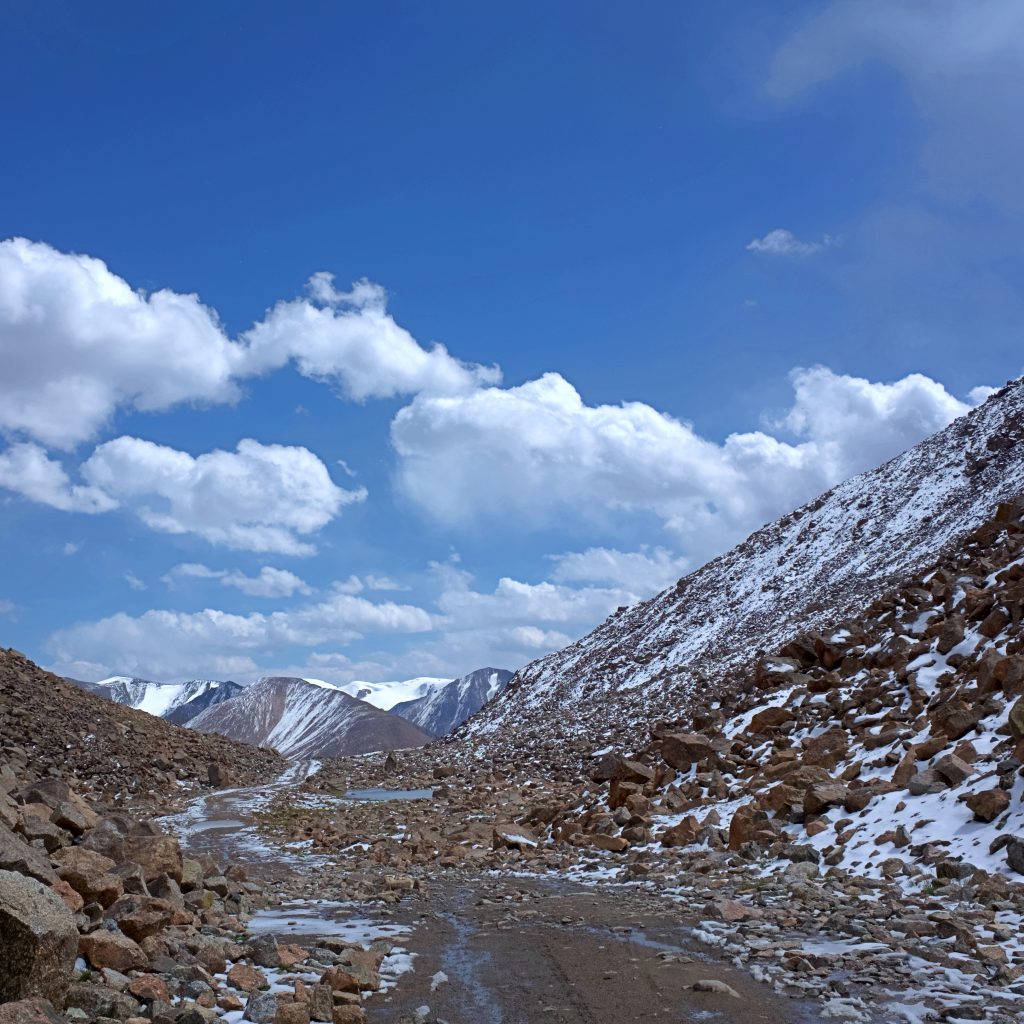 We were so lucky with the weather. Rained on for just a day we had mostly big blue skies but some sections of unrelenting headwind. Like all mountain environments things can change pretty quick either way and we were lucky to have bogs turned dry by a day of high winds before we got to them. Others had stories of waist deep bog trotting the same paths. There were many opportunities to get your feet , calves and waist wet and you should be prepared to plan to get to the bigger crossings in the morning before things have time to warm up and the crossings get deeper and faster flowing. 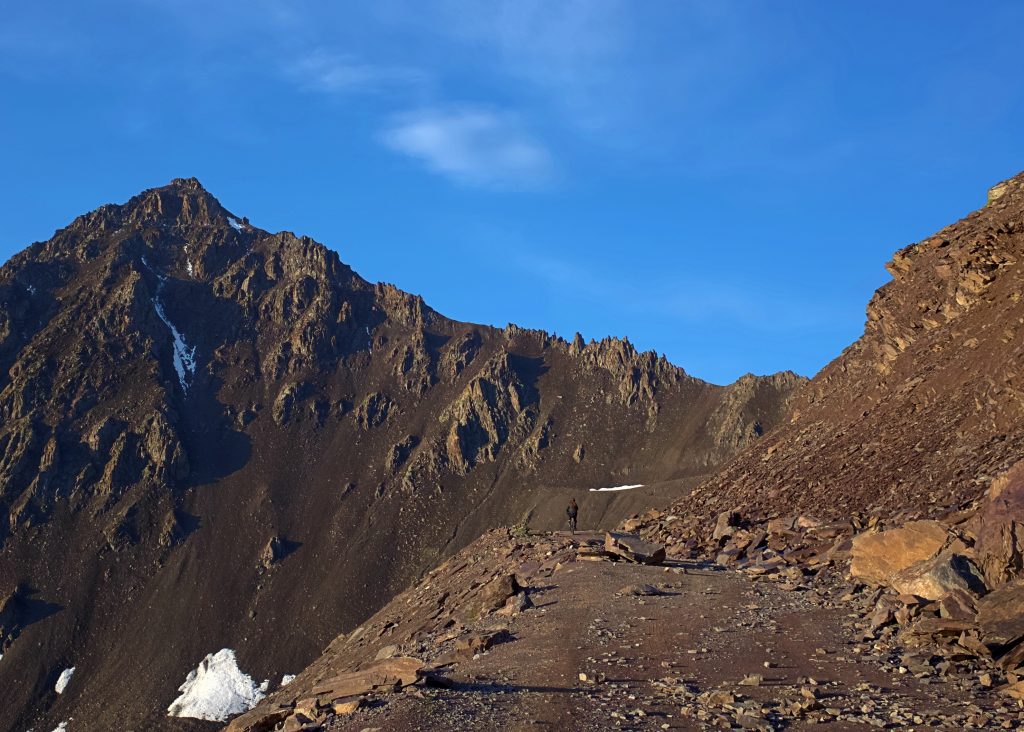 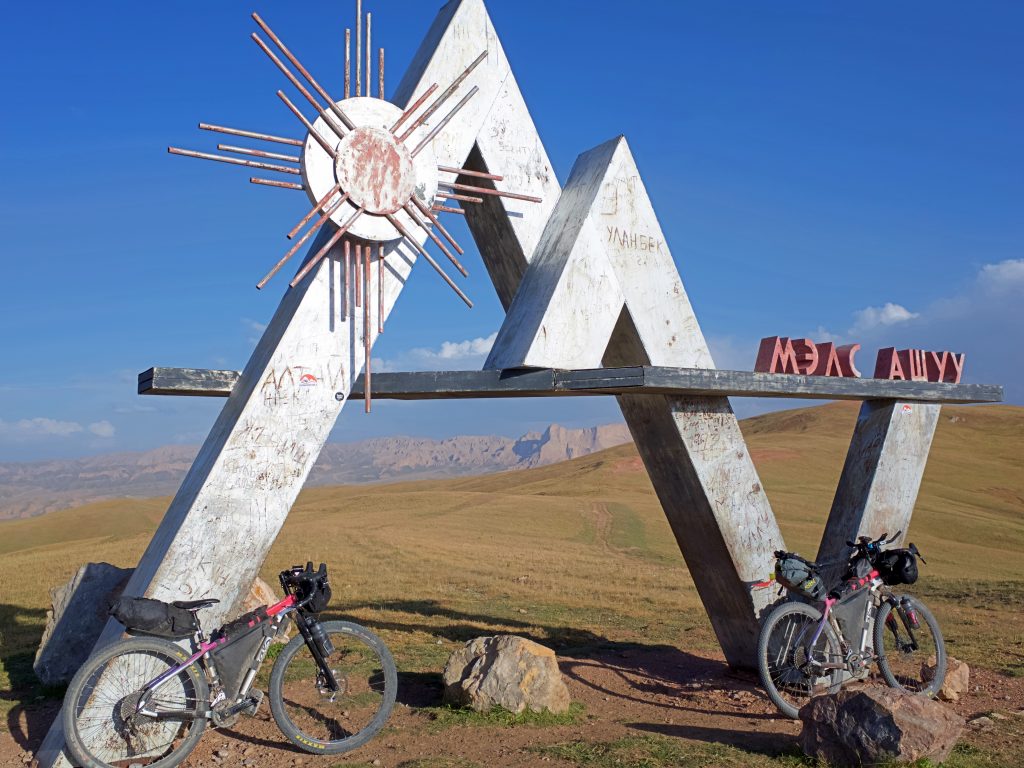 Dust, dirt, sunshine and cold kept some sort covering on our faces for most of the ride. Dust gets everywhere and it’s good to keep the sun and the wind from lips and noses too. Suffered a bit from swollen ankles once we stopped stomping and have the usual cuts, bruises and bashes but nothing at all that we wouldn’t expect. We wore compression tights at night for the first time, no idea whether that helped but probably kept us warmer! 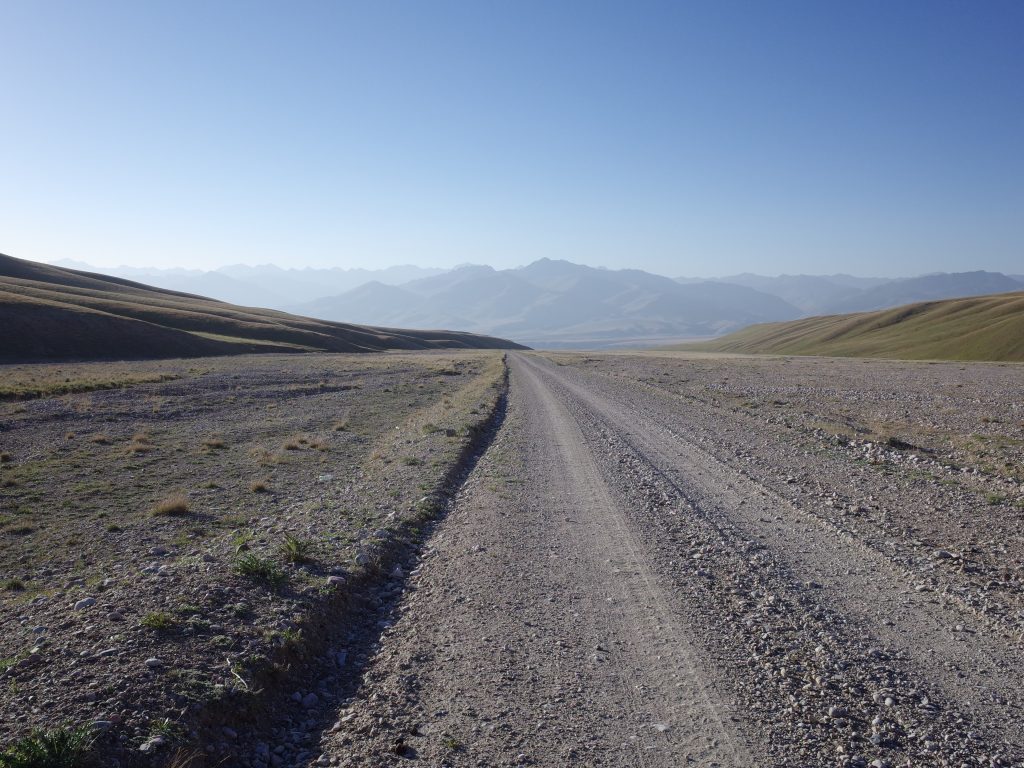 We took a +5 rated PHD sleeping bag reasoning that we took a tent and primaloft jacket so should be warm enough. Like most reasoning when planning this ride we underestimated… Minus 8 at 3500m in Kyrgyzstan is chuffing cold and we should have taken a warmer bag – 0 would have done it and made us better rested. No way would we have taken a bivvy and unless you’re really at the pointy end you probably shouldn’t either. 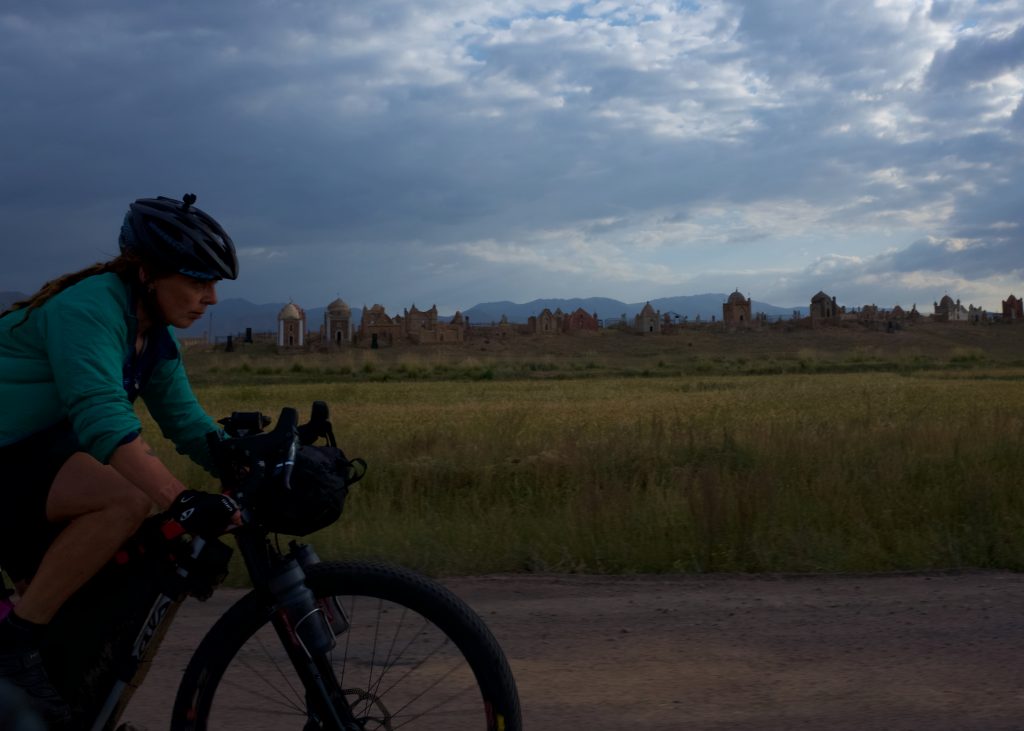 We rode Salsa Cutthroats. Tool for the job, counted 7 on the startline. Would have added a suspension seat post but that’s all we would change. 2″ Maxxis Ikon out back and 2.25″ upfront kept it reasonable comfy – we did discuss suspension forks while hunting for the ever elusive, mostly non-existent smooth line on those gravel roads but weight and added complexity would rule them out for us. As little bike as possible and all that. We used low gears – 11-42 cassette and 40/28 chainrings – any lower and we were quicker pushing. We kept basic Garmin Etrex 20 gps and phones charged using Sinewave Beacon headlights and SP dynamo hubs. During the day we charged devices and a small cache battery. In the dark we used the headlight and ran the cache battery to keep the light bright when we dipped to low speed.  We suffered just one puncture and no other issues.

A mixture of Salsa EXP and Apidura luggage did a great job of keeping our kit organised and dry. Apidura top tube pouch for snacks and seatpack for clothing. Salsa framepack was mostly used for food/stove and handlebar cradles for sleeping kit. We used a Nordisc 2 person tent, Klymit sleep mats and PHD Minimus sleeping bags. We took a Pocket Rocket stove and some titanium mugs for heating water for noodles, coffee and packet meals. Guess the only items we took and didn’t use were gilets, we were either frozen or boiled – not much middle ground. After much paranoia before we left we never touched the stack of brake pads we lugged around either. 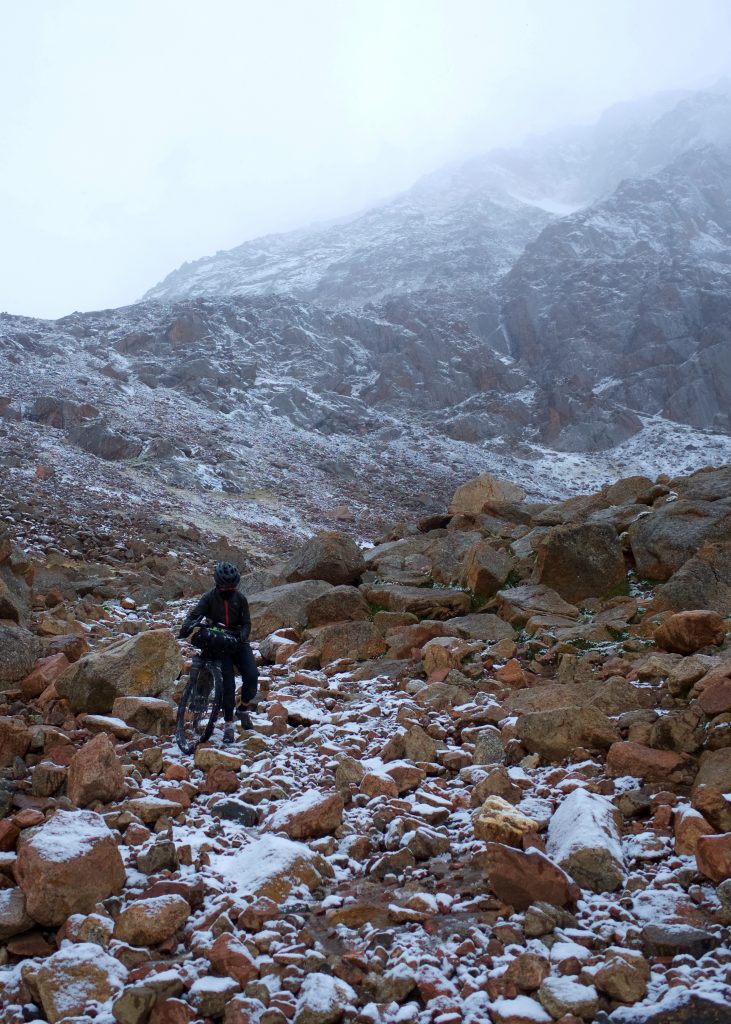 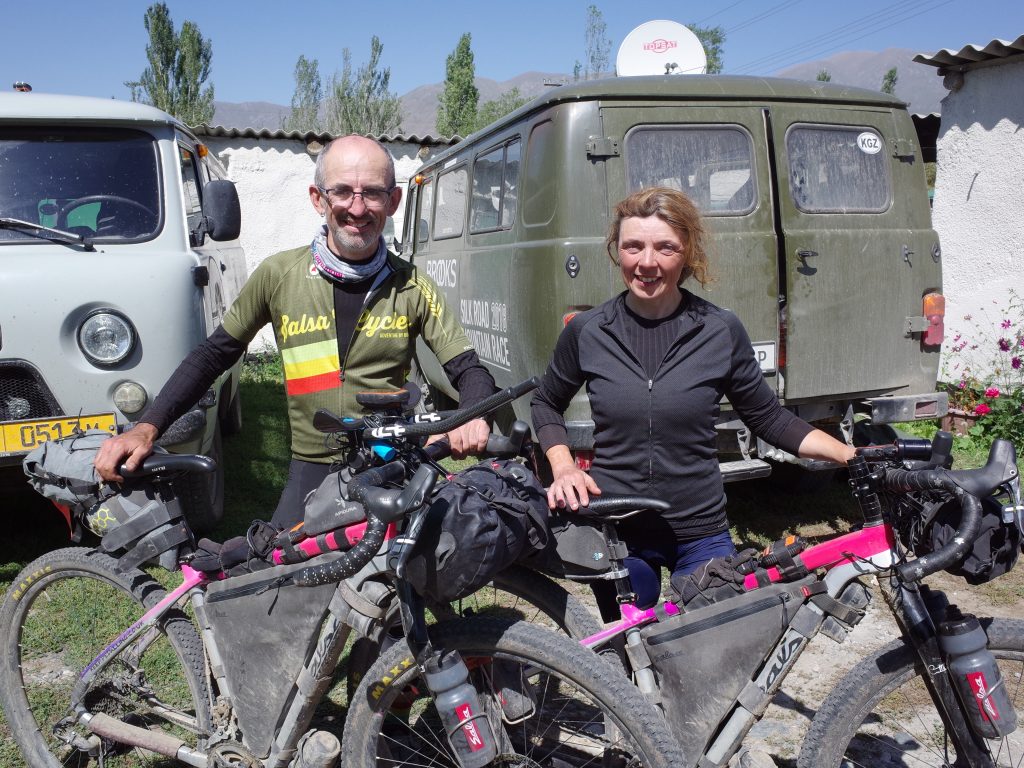 So, finished up in 14 days and a bit. Took far too many photo’s (Ricoh GRii if you need to know – lightweight and did the job), lost some weight and generally suffered a bit but had a fab old time all in all. Hats off to everyone involved in putting this event on in what really is in some parts the absolute end of the earth. A varied wheel selection for your inspiration... Left to right; SP dynamo laced to H... 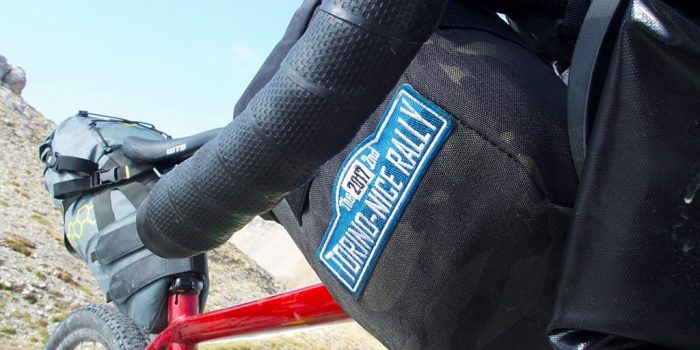 After seeing and hearing about last years inaugural Torino - Nice rally we decided it was definitely...